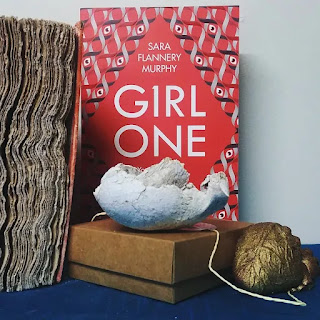 Josephine Morrow isn’t your average woman. Not only was she conceived totally without the input of a man, but she was the first of NINE such births. She is Girl One. But before a tenth virgin birth, disaster struck and everything changed. One night, a fire broke out at The Homestead which housed these special mothers and their daughters, killing the man that made it all possible; her namesake, Dr Joseph Bellanger.

Now that she’s an adult, Josie is following in Bellanger’s footsteps, trying to show herself and the world that his genius was not only brilliant, but repeatable. But she’s interrupted by an unforeseen hitch: her mom, Mother One, is missing.

In order to retrace her mother’s steps and find her, Josie must do something she’s never been allowed to do: return to the Homestead, and the other Mothers, who might be able to help.

But her hunt is hindered by a shocking revelation: not only did Dr Bellanger have less of a role than Josephine had always imagined, but he wasn’t anythign like she remembered. And nor were the other girls; because pathogenesis isn’t the only thing that’s special about these girls. They also each have a hidden ability which makes them not just freaks of nature, but a magnet for trouble.

Girl One is the latest in a long line of speculative feminist writing that’s recently took the literary world by storm, and it deserves its place among its peers. Sara Flannery Murphy has penned something amazing: this book contains well-written prose that has been wrestled into an astonishing story that is as unpredictable and moving as it is dark and delicious. A sprinkling of the supernatural also really elevates Girl One to something beyond dystopia; it brings a glorious color and texture to the story that can only be called art. Murphy's world is a sharp and nuanced creation filled with a satisfying balance between the mundane and the macabre, and boy does it sparkle! Add to that a dash of romance and a sprinkle of scientific horror and you have something that appeals to everyone, and ticks all the boxes.

If the story is familiar at points, it’s only because of the current prevalence of feminist stories – Girl One is an original that deserves to become a beloved classic, and I have NO DOUBT that Hollywood will agree, and snap up the rights to give the story new life on screen. Here’s hoping.

Girl One by Sara Flannery Murphy is published by Raven Books, a Bloomsbury company, and is available in South Africa from Jonathan Ball Publishers.