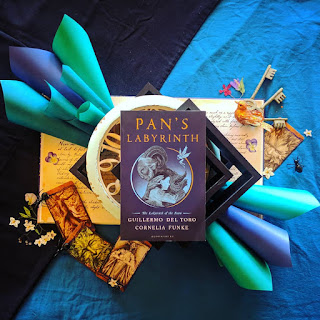 In a world where the trees whisper secrets and fairies exist, Ofelia is being taken to The Wolf. Along with her pregnant mother, she is en route to the military base in the forest run by her stepfather, the captain. Despite her despair at her new family dynamic, Ofelia can’t help but be intrigued by the forest surrounding the old mill, and the labyrinth nestled in its shadows. Just like the fairy tales she so loves, Ofelia’s world is about to become magical.

Tempted by a fairy, the young girl is lured to the labyrinth, where she meets a faun who declares that she is not Ofelia, but Princess Moanna. To return to her throne and her true family, she must complete three tasks before the full moon. Added to this challenge is the menacing presence of her step father, and a violent rebellion taking place within the woods.

Pan’s Labyrinth is the novelization of the eponymous film, gifted to us by the imagination of Guillermo Del Toro, a true magician and master of his craft. For fans of the movie, this is a treat to which words can do no justice. Filled with poetry, vivid imagery and a tingling sense of foreboding, the book offers a peek into the world not represented in the film – its history and myths, which answer any questions raised by the film. On its own, the book is a work of art, but together with the film, it is a study in the unbelievable.

There is something primal about this book – it is entrenched with a sense of nostalgia and wonder – an echo of the tales and beliefs we had as children, infused with the dangers and dramas of an adult world. Del Toro’s creation is a marvel. This novel captures the visual cues of the film, and adds to it a sense of depth and majesty, making it enjoyable from the first word, and creating a sense of great loss at the final full stop.

Pan’s Labyrinth by Guillermo Del Toro and Cornelia Funke is published by Bloomsbury, and is available in South Africa from Jonathan Ball Publishers.
No comments:

Review: The Girl in Red by Christina Henry 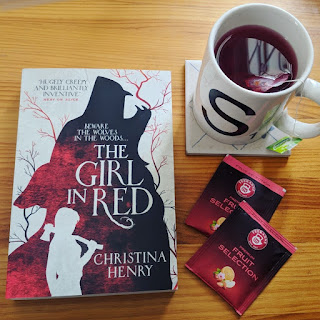 It’s the end of the world as we know it. Ever since The Crisis, in which people were infected with a deadly and highly contagious cough, society has unraveled. When Red and Adam’s parents fall victim to the Crisis, the siblings are forced to make their way across the woods to their Grandmother’s cabin, where they will hopefully be safe.

Despite Red’s preparation and obsession with what could go wrong (loosely based on horror films and an interest in epidemiology), the journey is perilous and frustratingly slow. Eventually, Red must complete the journey on her own; a young woman in a red coat making her way through the woods.

The closer she gets to her grandmother’s house, the greater the danger. Red is not ignorant of the ways of the world – The Crisis may have made people heartless and desperate, but here were always evil people and deeds to begin with. Scariest of all, however, is that the infection is not all they have to worry about. Thriving in a world of sickness and contagion is something else; something far more sinister and horrifying than any pathogen, and Red is about to meet is head on.

The Girl in Red is a modern and decidedly dark retelling of the well-known fairy tale. Set in a post-apocalyptic world filled with monsters both seen and unseen, it is ideal for fans of disaster and doom with a happy ending. Red may be alone, but she is not vulnerable – this is an empowering retelling of a badass woman on a mission, who can look after herself in a world of chaos and predators.

The Girl in Red is a great escape from the drudgery of the real world. At times somewhat slow, with the protagonist’s flaws and strengths repeated far too often to be forgotten, this remains a good read. Action packed, logical and fun, this book clearly demonstrates that you’re never too old for fairy tales.

The Girl in Red by Christina Henry is published by Titan Books and is available in South Africa from Jonathan Ball Publishers.
No comments: 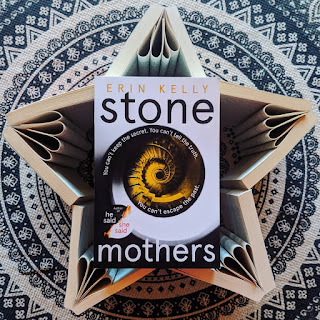 Marianne and Jesse have a history that goes back to their childhood; united by shared poverty and dark secrets, with Nazareth Hospital always at the centre. The hospital was once the backbone and monetary vein of Nusstead, but when it was closed and left to rot, the town stagnated with it. Despite Marianne’s escape from Nusstead, when her mother falls ill she is forced to return to the town and to Jesse.

When Marianne left Nusstead and Jesse three decades ago, she broke his heart. Despite this, their actions as teenagers bound them together; to bring the past to light would be detrimental for both of them. However, Jesse’s resentment and Marianne’s new life as a wealthy wife may just be the kindling that sparks her downfall.

Stone Mothers is an emotional thriller, playing on the feelings of reader and protagonist alike. With manipulation and tangled alliances fueling the narrative, this story is an emotional battering ram that will make any reader swear off the kinds of promises that could later lay foundations for mistrust. The stealthily veiled past that forms the nervous centre of the narrative is cleverly and slowly revealed, adding a palpable tension that prevents the reader putting the book down. As we slowly move closer to the truth and deeper into the past, we realise that while Nazareth was the heart of the story, it was also the toxin that poisoned everything.

Stone Mothers is not your typical fast-paced, horror-filled gasp-athon. It is much more subtle, and ultimately more satisfying. A well-plotted story full of twists, with an ever-building tension make this story the kind of literary spiral you want to fall into. Polished, clever and gripping, Stone Mothers is a great treat for anyone who is willing to go on an adventure.

Stone Mothers by Erin Kelly is published by Hodder & Stoughton, and is available in South Africa from Jonathan Ball Publishers.
No comments: