Review: I Will Miss You Tomorrow by Heine Bakkeid 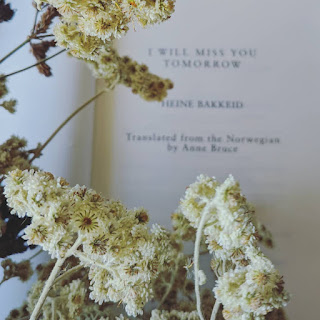 It’s safe to say that Thorkild Aske has hit rock bottom. The former Internal Affairs investigator not only lost his job, but attempted suicide and ended up in a psychiatric hospital for a while. However, now that he’s served his time for accidental death he caused, it’s time for him to once again join the world. Though he is banned from police work for life, he somehow gets roped into a private investigation into the disappearance of a young Dane. As he delves into the investigation and goes in search of the missing diver, he comes face to face with his past, and memories the spirited woman who was key to his downfall.

I Will Miss You Tomorrow makes superb use of the unreliable narrator. In his near constant drug-addled state, Thorkild spends his days balancing on the edge of a very thin divide between truth and fantasy – between witnesses and hallucinations. Despite this, he seems convinced of the truth, even though the doctors and police have their reservations. With a knack for being in the wrong place at the wrong time, Thorkild seeks not only the truth, but the redemption that accompanies it.

An interesting mix of fantasy and gritty dark crime drama, this book is an unexpected treat that seeks to humanize the detective genre, and the stone-hearted people who create the face of the genre.
Despite his flaws, his dependency on anti-psychotics and pain medication, and his hesitancy to actually investigate, Thorkild proves himself to be an excellent detective, and a decent human being.

I Will Miss You Tomorrow is the first of a series, and while the protagonist seems to lack the staying power we generally associate with series, I can’t help but feel excited to see what happens next. If you like your whodunnits to have as much heart as they do grim reality, this book is for you. An easy read that transports you to the cold and storm north of the world, it’s a great adventure, and worth every second.

I Will Miss You Tomorrow by Heine Bakkeid is published by Raven Books, a Bloomsbury company, and is available in South Africa from Jonathan Ball Publishers.
No comments: 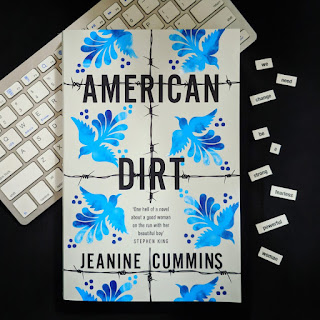 Lydia was happy. She was surrounded by things she loved – her husband, Sebastian, their son, Luca, and her book store. Then, at a family barbecue, everyone she loved was taken from her – her entire family brutally massacred with the exception of Luca. And all because her husband wrote an expose on a drug cartel.

Now, Lydia needs to escape not only her hometown of Acapulco, but her country – as long as she’s alive, she’ll be hunted by the cartel. But how do you escape a country when the cartel has everyone on their payroll – from the police to the staff at the check-in counters at the airport? Lydia and Luca have no option but to flee as migrants, trusting their lives to a coyote and the vast desert that lies between them and freedom – between Mexico and the USA.

American Dirt is an incredibly moving and gripping story – not least because of Cummins' grace at describing the macabre realities of Mexican migrants, but at her ability to highlight the plight of millions of people who are otherwise ignored and invisible. Through the power of the pen, Cummins illuminates just a fraction of the deplorable state of immigration for migrants, and yet just this small piece is enough to leave you reeling.

Not only is American Dirt well-written, with flowing prose made all the more poetic with tasteful insertions of Spanish, but it is a poignant social commentary that speaks to the strength of character of people who have nothing to lose; who have had everything taken from them, and yet persevere. This book is a testament to the cruelties we inflict on each other, while at the same time, emphasizing the enormous strength that can be found if only we are allowed to hope.

Reading this book will make you uncomfortable, outraged, and shocked, yet grateful that so much is presented in such a beautiful package. In a world of complacency and fake news, this is exactly what we need.

American Dirt by Jeanine Cummins is published by Tinder Press and is available in South Africa from Jonathan Ball Publishers.
No comments: