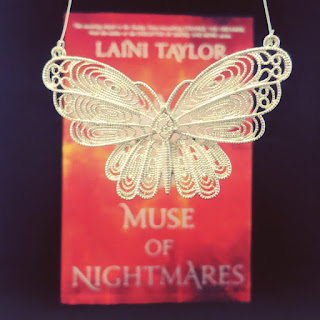 Sarai is dead. Lazlo is blue. The world has been turned upside down. Thankfully, Minya has used her strange gift to keep ahold of Sarai’s ghost, so that she and Lazlo are finally, despite the circumstances, together. Yet Minya’s gesture is steeped in ulterior motives – with Sarai as a plaything, she can control Lazlo Strange and force her way along a path of bloody retribution. Unless Minya can be stopped, Strange and Sarai can never have their happy ending, corporeal body or not.

However, Minya’s games are not the only concern the young lovers have – Strange’s discovery of his powers and reawakening of the citadel means that, as doorways are reopened, so are secrets revealed. The inhabitants of the citadel are suddenly made aware of their history, with age-old questions answered, but not the answers the godspawn anticipated. With the knowledge come greater foes and far-reaching threats which span not just the world, but worlds.

I am no doubt not alone in my slight hesitancy to read a sequel; often, they do not live up to the first book, yet Laini Taylor has surpassed my expectations and asserted herself as a force to be reckoned with. Taylor has taken a solid foundation created in Strange the Dreamer and expanded it to create an immense world that, dare I say, allows this book to outshine its predecessor. Kicking off sheer moments after the final moments of the last book, no time is wasted in welcoming the reader back to the city of Weep.

Muse of Nightmares is a superb book – the imagery exceeded my expectations, the plot was intricate and so cleverly put together, the characters evolved into mature versions of their past selves, and the lore was breath-taking and imaginative. Taylor’s talent is evident on every page of this book, and is a gift for the reader, to be cherished and marveled at. With this book, you hold the universe in your hand; don’t let it pass you by.

Muse of Nightmares by Laini Taylor is published by Hodder & Stoughton and is available in South Africa from Jonathan Ball Publishers.
No comments: 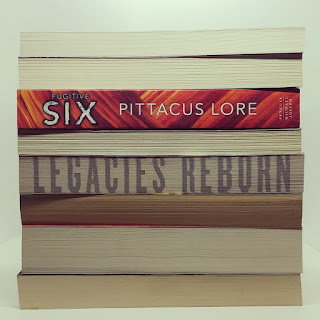 The Mogodorian invasion may be a thing of the past, but the Lorien and newly legacied human Garde still face other challenges. The Foundation is a shadowy group attempting to sell off those gifted with legacies to the highest bidders, and are behind abductions and disappearances of Garde around the globe. In addition, fear mongering by mainstream media has people afraid of the powers exhibited by the gifted teens now has tempers high and tensions higher. Despite everything, Earth needs saving from itself, and the Fugitive Six are determined to come to the rescue.

Action-packed from the first page, Pittacus Lore wastes no time setting the scene and thrusting the reader into turmoil. Sadly, this quality means that the book would not be as enjoyable as a standalone novel, and really only blooms when read as part of series. However, for those who have been following the Lorien from their initial arrival in I am Number Four, it feels like going home. With a return of characters from previous books, and a hinting at more exciting things to come in the next chapter, the tension is palpable.

There is so much to love about the Lorien series – it is an immensely easy and fun read, with an offering of everything; mystery, intrigue, action, fantasy and romance – I think you will be hard-pressed to find someone who won’t enjoy this series; it was crafted with general appeal in its DNA.

The only major downside to this series is that each book ends with a dramatic cliffhanger, which proves a wreck for one’s nerves, and the wait until the next installment is as frustrating as it is tedious. A well-established series such as this also makes a reader somewhat greedy – I want the rest of the story immediately, and thus have to warn readers that starting this series may increase your levels of sass and grumpiness as you wait for each new offering. So, until we meet again, Mr Lore, I wait impatiently.

Fugitive Six by Pittacus Lore is published by Michael Joseph, an imprint of Penguin Random House.
No comments: