Review: The Girl Who Takes an Eye for an Eye by David Lagercrantz 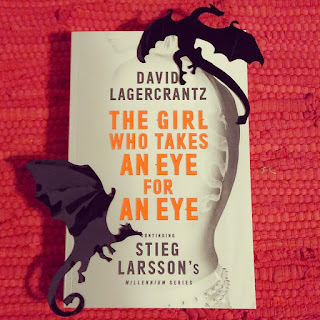 When we last left Lisbeth Salander, she saved a young boy’s life by kidnapping him. The Girl Who Takes an Eye for an Eye commences with Salander’s two-month sojourn in prison as a result. Yet being behind bars does not dampen Salander’s search for justice, as she continues to lead journo-extraordinaire Mikael Blomkvist on yet another quest to uncover something earth-shattering.

Mikael is once again forced to investigate the unspeakable horrors from Salander’s past in an effort to connect the scant clues she leaves him. In so doing, he realizes that Salander was not the only child subjected to unorthodox therapies, and that others exist, though they may not be aware of it.

Lisbeth is the ultimate badass vigilante, literally kicking ass and taking names. Her ability to focus all of her considerable smarts and strength on a problem is both thrilling and unsettling. In stark contrast, Blomkvist’s James-Bondesque wooing while he gets the job done, a beautiful woman on his arm on each new adventure, provides a much-needed softness and emotional edge to Salander’s social disconnect and the terrible past which helped create it. The pair make an unusual but highly effective team, and this latest installment in their various adventures is just as pleasing and well-thought out as any other.

Steig Larsson set the bar incredibly high with his first Millenium Trilogy. His characters possessed a depth and intensity that made them all the more impressive given the darkness of the events they experienced. Despite this, David Lagercrantz has done a remarkable job of continuing not just an entertaining franchise, but of staying true to Larsson’s narrative and dark world.

I don’t think I will ever tire of Lisbeth Salander and Mikael Blomkvist, nor the unbelievable situations they continually find themselves in. These characters, with their various quirks and enviable intelligence, are a literary feast. So I thank Mr Lagercrantz, and urge him to hurry up with the next epic investigation.

The Girl Who Takes an Eye for an Eye by David Lagercrantz is published by MacLehose Press, an imprint of Quercus books, and is available in South Africa from Jonathan Ball Publishers.
No comments:

Review: From Here to Eternity by Cailtin Doughty 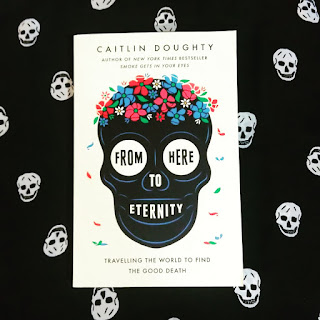 Through her book, Caitlin Doughty raises a valid point which I’d never before considered – humans have vastly different views on death and death practices, spanning across cultures, geographies and time. From here to Eternity seeks not only to illuminate a few of the differing practices surrounding death, but to understand why the topic of death elicits such a variety of responses, when we all must succumb to it regardless of beliefs.

A mortician by trade, Doughty travelled the world to understand what death means to others. In her homeland of America, where funerals are among the most expensive in the world, traditional funeral pyres and not so traditional attempts at human composting are discussed. Doughty visits Indonesia, where corpses are mummified over time and treated as one of the family despite no pulse. Mexico’s Dias de los Muertos festivals honouring death are visited. Spain’s attempts at making death ‘green’ feature along with Japan’s culture of suicide and highest cremation rate in the world. Finally, we’re taken to Bolivia, where skulls are venerated without their bodies. In short, From Here to Eternity chases death, in a hope to understand it, and what a journey it is.

Caitlin Doughty has an easy yet respectful humour, which together with her informative yet conversational tone make the book not only easy to read, but highly enjoyable. In addition, there are beautiful illustrations which serve to emphasise certain points, which give the book an entirely relaxed, artistic feel. Far from a macabre fascination with death and dying, this is an intelligent look at how funeral practices, mourning and death itself differ radically across the globe, and an explanation of some of the reasons behind this.

From Here to Eternity is intriguing, directly asking the questions many find taboo, yet all must face when their time comes. A phenomenon as natural and unavoidable as birth, death is just another part of the great adventure of life, and Doughty emphasizes that we do not need to fear or shy away from it.

From Here to Eternity by Caitlin Doughty is published by Weidenfeld & Nicolson, an imprint of Orion Books, and is available in South Africa from Jonathan Ball Publishers.

Review: Under Glass by Claire Robertson 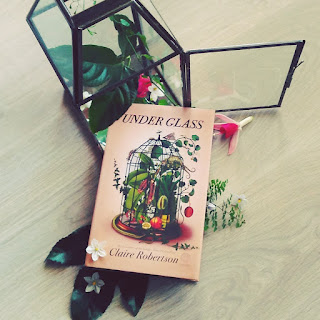 Mrs Chetwyn arrived in Africa with her young daughter amid a storm. Her husband went ahead, and while she fears they may not reach the shore, he hunts. Once safely ashore in Natal, she began the arduous journey of making a life in a foreign country. Chetwyn was promised assistance from his father, yet the couple soon discovers that any land which they purchase will belong to them only if they produce an heir. Yet Mrs Chetwyn’s second and third pregnancies produce girls.

Determined to try again for the security of the family, Mrs Chetwyn becomes pregnant once more. Cosmo, the fifth child of the pair, was the answer to their prayers – a son to whom the land could be left; a savior of the family, arriving at precisely the right time. Surrounded by the women in his family, he is a prized possession, with both his person and the weight balanced precariously upon his shoulders watched and guarded obsessively.

As Cosmo grows, so does his responsibility as sole son and heir. All the while, the family’s farm flourishes, and Mrs Chetwyn’s garden, gifted to her in unknown seeds by an enthusiastic botanist, becomes her sole escape and private sanctuary.

I was almost weary of reading Under Glass, for colonial-era literature can be tricky to navigate, the waters surrounding the topic both muddy and deep, yet Claire Robertson avoids all the usual pitfalls of literature of this type. Her focus on language and race is only as a foundation for an enchanting story, and not a focus point that dwarfs the plot. The plot itself is akin to the specimens in Mrs Chetwyn’s garden – multifaceted and eager to unfurl as petals on an exotic plant. Robertson has a talent for presenting the unexpected, and for shepherding the reader into a world beyond their own.

Under Glass is unpredictable, poetic, and deeply thrilling. It is a story of more than new beginnings and the family which casts them – it breaks borders between loves won and lost, secrets hidden and revealed, and circumstances beyond one’s control. A worthy read for any literary fan, Under Glass will find a home on any shelf, and certainly be cherished there.

Under Glass by Claire Robertson is published by Umuzi, an imprint of Penguin Random House South Africa.