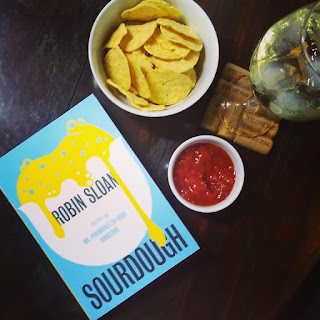 Lois may be a brilliant young programmer who was headhunted to work at a powerful company, but her stomach aches. Her stressful job requires long hours, meaning she’s hardly ever at home, and hardly ever eats a decent meal. In fact, she’s taken to eating Slurry, a greyish goop that’s nutritionally sound and boring, and straight out of an 80s sci-fi flick. Luckily for Lois, and her poor stomach, that is all about to change. Clement Street Soup and Sourdough, a foreign and strangely mystical restaurant, comes to the rescue via a take-out menu. Intrigued, Lois orders a meal, and (as they say in the classics) that changed everything.

To say Lois developed an addiction to the new cuisine is perhaps an understatement. A daily order and blossoming friendship with the restaurant owners leaves her feeling more peaceful than she has in ages. Yet when the brothers who run Clement Street Soup and Sourdough inform her that they’re leaving the country, and cede her their sourdough starter, Lois realizes that there’s way more to life and happiness than work.

Hesitant and inexperienced, Lois learns to bake bread. While doing so, she immerses herself in culinary history, intrigue and research, leading to a world of food she had never considered, and the foodies that populate it.

Sourdough, in a word, is fun. It’s a truly lovely story that’s easy to read, and fills you with the warm fuzzies. It’s also quite fill of dry humour and many pop culture references that will leave any twenty-something snickering and giggling. Well worth the read, as you’ll feel your stress levels decrease. However, be warned, you will not be able to read this without munching something. Sourdough is a joyful, clever ode to food, and every word is delicious. Treat yourself, and your shelf, and get a copy.

Sourdough by Robin Sloan is published by Atlantic Books, an agency of Penguin Random House.
No comments: 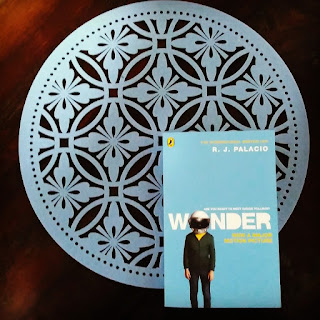 August Pullman is about to start fifth grade, but it’ll be his first time in a school; before that, he was homeschooled. Homeschool seemed more practical given the number of times Auggie was in the hospital, or recover. A one-in-four-million combination of genetic conditions has left Auggie with an unusual face and caused doctors to have a gloomy outlook on his chances of surviving. However, numerous surgeries down the line, and used to the looks he gets from strangers, August is ready to start his greatest challenge yet – middle school.

August tells his family that he is ready, and considers himself prepared for whatever school can throw at him, but he slowly learns that middle school was nothing like he imagined. It is infinitely more nuanced; a million times better and desperately worse than he thought.

Wonder depicts the tightrope act that is modern childhood; a balancing act between immense (ignorant) cruelty and a mind-blowing ability to love. Children are often considered blank canvases, yet mimicry of peers is also a starkly highlighted characteristic of most children. August is exposed to both immense cruelty from children and parents alike, and yet he also experiences immense love and true friendship.

While it’s absolutely true that I had several “I’m not crying – you’re crying!” moments with words blurred by tears, I was equally enthralled by Wonder, and unable to put it down, even to wipe away tears. August is literally the embodiment of beauty being in the eye of the beholder. In a world where appearances are so critical, August shatters the mould and R.J. Palacio that the heart and human kindness know no bounds. Simply put, Wonder is mesmerizing and devastatingly beautiful. It is an easy but powerful read, and I highly recommend it to anyone who doesn’t mind being seen crying with a book. Bring tissues.

Wonder by R.J. Palacio is published by Puffin Books, an imprint of Penguin Random House.
No comments:

Email ThisBlogThis!Share to TwitterShare to FacebookShare to Pinterest
Labels: featured, five stars, highly recommended, I'm not crying you're crying, YA 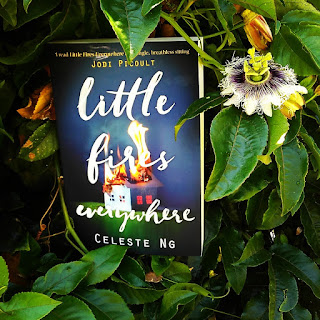 Pearl has been moving around with her mother Mia for her entire life. The pair only stay in one place long enough for Mia to finish whatever art project she is working on, before they pack up and hit the road for another town, another state. When they enter Shaker Heights, however, Mia promises Pearl that it’s the last move, that Shaker Heights will be their new home. Thus encouraged, Pearl befriends Moody, his sister Lexie, and their brother Trip, determined to set down roots and be a normal teenager.

Things are going well for Pearl in this new life. She has friends, the boy she has a crush on seems to feel the same way, and her mother is busy with a project. Amid them, the local media is covering an adoption scandal, where questions over what’s best for the baby lead Pearl to wonder about her own infancy, and her mother’s secrecy surrounding it. As fate would have it, though, Pearl is not the only one who is interested. As amateur sleuthing is undertaken, a series of secrets from the past and present begin to come to light, with an unstoppable force.

Little Fires Everywhere is an addictive read – I worked my way through it in a day, eager for the next part of the narrative to be revealed. On the surface, this may seem to be another coming of age novel of a group of teens, but really, it is so much more than that. Several intricate plots are woven together for a seamless finish, which under the hands of a lesser writer would be chaotic and hard to marry. Celeste Ng has bound heartache and loss with the shadows of taboo and cross-cultural chaos, to bring together a dramatic, polished read which is as absorbing as it is meaningful. Ng gives us a cross-section of the meeting points of different ages, perspectives and beliefs, and it is beautiful.

Little Fires Everywhere is a work of art; the finished product is an effortless delve into a world you’d never have pictured yourself in otherwise, and it is very insightful journey.

Little Fires Everywhere by Celeste Ng is published by Little Brown Book Group and is available in South Africa from Jonathan Ball Publishers.
No comments: 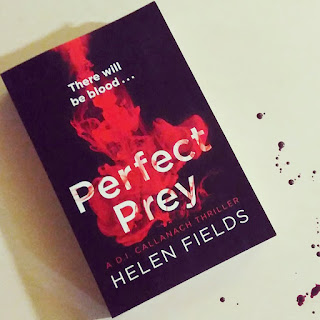 DI Luc Callanach has been with Police Scotland for nine months, and his second high-profile case has just become the city’s newest talking point. A series of gruesome murders, each seemingly unconnected and without motive, has gripped the city, leaving the coppers and the media floundering and spread thin. Together with DI Ava Turner, the Police Scotland team frantically tries to piece together any clues they can. However, when a local journalists helps Callanach identify a pattern, it seems possible to that the deaths can stop, if only they can get to the perpetrator before the next victim’s time runs out.

As if having multiple homicides to deal with isn’t enough, Callanach needs to contend with DCI Joe Edgar, an obnoxious cybercrime specialist sent from London, who has ties with DI Turner’s past, complicating the pair’s friendship and working environment.

I started my love affair with DI Luc Callanach and co in Fields’ first book in the series, Perfect Remains. Since putting that one down, I’ve been (im)patiently waiting more, and Perfect Prey delivered 100%. An added advantage of being a fan girl to such a series is that you risk being disappointed with new stories and characters, but not so in DI Callanach’s case – truthfully, I cannot find any fault with this book.

Helen Fields is like a drug pusher – her stuff is so good, you stay up at night thinking about it, and try to get all your friends to try it, and then they get addicted. She carefully crafts a story which unfolds so cleverly that you don’t want to put the book away and risk missing anything (I read a large portion of the book in the car while road tripping…) Perhaps most impressive, especially if you devour books as I do and are quick to spot patterns and predict the identity of killers, is that nothing in Prefect Prey is predictable. The suspense hooks you right until the end, when Fields gives up the goods, and proves you (refreshingly) wrong in your guesses. I loved it.

Allow me to live up to my comparison and say that you need to read this book; it’ll change your life and make you cool. Well, at the very least, you’ll have an excellent time.

Perfect Prey by Helen Fields in published by avon books (an imprint of Harper Collins) and is available in South Africa from Jonathan Ball Publishers.
No comments:

Email ThisBlogThis!Share to TwitterShare to FacebookShare to Pinterest
Labels: featured, five stars, murder most foul, who REALLY did it? 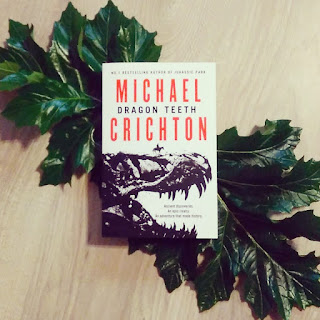 It started with a bet. William Johnson entered a wager for $1000 that he would not travel West, for fear of Indians and general discomfort. However, not one to be socially disgraced, Johnson arranges with Professor Marsh (the head of palaeontology at Yale) to accompany a group of students westwards in search of fossils. Though he lacks enthusiasm for the trip, Johnson prepares himself and departs with the others, determined to win the bet.

However, things go awry early into the trip, when Marsh suspects Johnson of being a spy for a rival professor, and abandons the young man en route. Luckily for Johnson, the rival himself, Professor Cope, agrees to enlist the deserted man on his own expedition, and Johnson once again sets off in search of fossils, in a notoriously violent and restive part of the country – the Badlands. From here, it’s a battle against the rival fossil hunters, the military, and the native Indian tribes, while the team makes a truly miraculous discovery, well worth dying for.

Dragon Teeth is a remarkable story which snares the reader from the start. Filled to the brink with action, yet with the feel of a decidedly well-researched and detailed (yet totally engaging) historical lesson, it’s a wild trip the whole way. Not the biggest fan of westerns myself, I expected to be put off, but Michael Crichton has a talent, because he has definitely converted me. Between dusty plateaus, gun-slinging bandits and a fear of being scalped, there’s nothing mundane about Dragon Teeth. In addition, Johnson is such a likeable character – not a fan of science or history at all, his flippant acceptance of the trip simply to win a bet soon evolves into an endearing passion for the fossils his team discovers. His is character development of the best kind – from scoundrel to loveable yet unlikely hero.

Dragon Teeth by Michael Crichton is published by Harper Collins, and is available in South Africa from Jonathan Ball Publishers.
No comments: