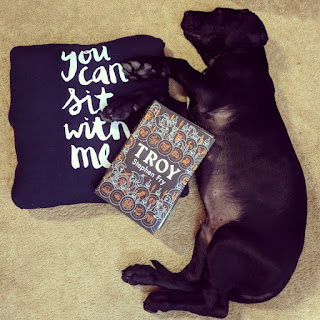 Long ago, when gods still roamed the earth and the world was a playground for the egos of important men, the unthinkable happened. Prince Paris of Troy was promised the love and adoration of the most beautiful woman in the world, as seen through a vision given to him by the goddess of love. Unfortunately, this unnatural beauty – who went by the name of Helen – was already married to another man. In response, Paris decided to sail to Sparta and kidnap Helen, under false pretenses. His actions so enrage Helen’s husband that he and his brother immediately launch war against Troy, in order to return Helen to her home. However, what started off as a rescue mission soon became a decade-long stalemate and brutal war that is still recounted thousands of years later.

If you thought you knew about the story of Troy – and particularly of those events involving a certain beautiful lady and a ten-year long war, you’re wrong. Not only has Stephen Fry made this popular myth as relatable and interesting as any film starring Brad Pitt, but he’s improved it with the addition of more context and history than any film could ever hope to represent. Whether you like a good adventure, are a history buff or just enjoy Mr. Fry’s particular skill with a pen, this book will not disappoint.

While this book forms the perfect companion for the other similar works in Mr. Fry’s repertoire – Mythos and Heroes – it is also perfectly suited as a stand-alone work that is every bit as brilliant and entertaining as Homer intended, while being far easier to enjoy. Fry has delved into the tangled mess of history for us, so that we don’t need to struggle and trudge through endless names, facts and events just to get to the juicy parts of one of the most infamous wars of all time. Complete with Fry’s signature wit and sassy humor, Troy takes ancient history, and rebrands it as modern adventure suitable for any audience. The effect is dazzling; not only are we given a beautifully curated and modernized tale, but in so doing, Fry has made Greek mythology (dare I say it?) sexy. If that’s not talent, I give up.