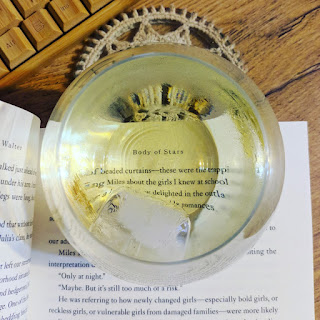 Celeste and her brother Miles may have been born two years apart, but they’re essentially twins. For as long as either can remember, the other has always been there. But unlike other families, Miles has always been obsessed with his sister’s markings, and what they mean. By the time Celeste becomes a changeling and her juvenile markings are replaced by adult markings, Miles is somewhat of an expert interpreter. Only, she can never let him know what her adult markings predict, because they spell out Miles’ future, too, and it’s not a good one.

However, just as she is coming to terms with what her new future will look like, Celeste becomes another statistic; she’s abducted. Two weeks later, she returns home, broken and tainted, and the life she once envisioned slips away into a river of shame and misfortune. Eventually, Celeste decides to finally show Miles her markings, but is surprised to learn that her brother has a secret of his own, and if she’d known, everything could have been different.

Body of Stars is a phenomenal book, and its dystopian message is all the more believable because it is set in a world similar to ours, with a key difference: all women are born with a set of markings that literally predict the future. Their juvenile markings change when they become adults, after a short period of being a changeling. Unfortunately, it’s a risky time in any girl’s life, as the changes cause them to be irresistible, putting them at enormous risk of ending up like Celeste: abducted, raped, only to be returned broken and without a hope of a decent future.

Reading this book left me in awe, and angry. Part of what fuelled my rage was the injustice faced by these characters, which mirrors the many challenges faced by so many women – and men- throughout history. When a social construct such as gender inequality is dissected and rearranged into fiction, it becomes so much easier to identify its flaws, and spark outrage that there’s no solution. While Body of Stars is primarily based on gender issues, the formula is applicable to any modern social injustice – from racism to class inequality. The plot is both brilliant and devastating because it could be altered to represent any form of oppression – cruelty can have many faces.

Initially, Laura Maylene Walters gives us the fleeting impression that women’s abilities to know the future and to interpret fate make them valuable and powerful, but we soon learn that is not the case. This is a world that blames broken young women for their own misfortune, and by failing to lay blame with the perpetrators, effectively offers up its women as victims, while reminding them that being abducted is determined by their own actions. In fact, there’s a line that sums up this twisted perspective; “to be abducted indicated a moral failing; a lapse of judgement and restraint that pointed to a more serious deficiency”. The stigma follows them for the rest of their lives; crushing their dreams of attending university, and robbing them of careers and pride.

As we witness Celeste’s shame and despair, and her fruitless pursuit of justice, it’s impossible not to lament the fact that no one cares. Here, the taboo is commonplace, and outrage has become complacency. In fact, abducted girls are not even considered victims; they take on the shameful persona of perpetrator and victim. In trying to cope with her new role as the one at fault and the one who was faulted, Celeste turns to fantasy, and reads a tale about people without markings, in which the future in uncertain and nothing is left to fate. Our protagonist explains, “In that book, both girls and boys grew up blank. They were the same.” She imagines a world in which there are no markings, and it changes everything.

Only, the reader does live in a world free of markings, and it changes nothing. Celeste’s story is so moving because it isn’t new. It isn’t even fictional. We live in a world of differences, and rather than embrace these and learn from them, we allow the unknown and the unexperienced to make us afraid. That fear is the root of nearly all social injustice; taboos bleed into each other and create a nightmare reality.

Body of Stars is more than just a clever story with a beautiful narrative and relatable characters, although those aspects alone make it well worth a read. It’s the type of book that plants a seed in your mind, a read that gives you goosebumps and makes you dash down your thoughts and insights in an excited scrawl; the type of book you lend to friends and family. This story has the power to incite a revolution and make history, if only we listen to its call to stop the shit, and fix our society. To do this, we need to rely a little less on judgement and oppression, and a little more on embracing opportunity and making the right voices heard.

You don’t need to be a feminist to appreciate this book, but it is a good starting point. From there, you’re free to become a global citizen and do your part to end injustice. Do you accept the challenge?

Body of Stars by Laura Maylene Walter is published by Hodder Studio, an imprint of Hodder & Stoughton, and a Hachette company. It is available in South Africa from Jonathan Ball Publishers.