Review: The Testaments by Margaret Atwood 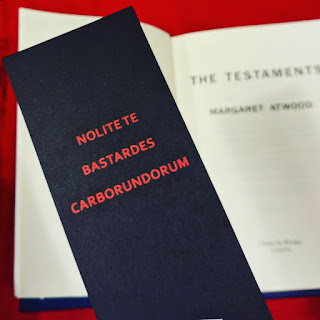 Fifteen years ago, Baby Nicole was secreted out of Gilead, into the hands of a Canadian terror group called Mayday. At least, that’s what Gilead maintains. The child of a commander and his Handmaid, Baby Nicole now serves as a symbol for both Gilead and her neighbor, begging the question of where she belongs. While relations between the two countries are strained, the disappearance of the young girl was only the beginning. Mayday has been assisting Handmaids to escape Gilead for some years, and it is up to those in power to crush the resistance, and ensure Baby Nicole’s return.

Long-awaited sequels tend to follow two broad paths; either they are a success, or a dismal disappointment. It gives me pleasure to inform you that The Testaments is well worth the hype. Atwood’s documentary-styled narrative is both unsettling and deeply satisfying. While lingering questions from our previous sojourn to Gilead are finally answered, this occurs against a backdrop of greater oppression, systems teetering on the brink of destruction, and a seeping hopelessness and resignation. However, below this outwardly sullen acceptance of the world of Gilead, revolution is brewing. All that stands between the oppression of Gilead and freedom is the voice of a desperate woman.

Despite the parallels between her latest offering and The Handmaid’s Tale, The Testaments is a voyeur’s perspective of Gilead from within its archaic structures. If you’ve read The Handmaid’s Tale, you’ll know the version of Gilead experienced by the women in red, yet The Testaments has a more sinister overtone, told through the perspective of those who grew up in the system, and those who created it.

At its core, The Testaments is a powerful volume exploring the consequences of being silenced. Though Atwood refers mainly to gender- and class-based discrimination, the formula can be applied to any of the modern social ills – a recipe for disaster regardless of the ingredients.

In a world where chaos is beaten out through suffering and punishments, the rigid orders that follow are only as secure as those who uphold them. Should those foundations crumble, the entire empire risks collapsing, and there’s no way you can read this without longing for a hard hat and a sledgehammer. A warning, a lament, and a cautionary tale of the many dangers of fanaticism and blind faith, Margaret Atwood has once again shaken the literary world with this powerful narrative. The Testaments is a call to action – to reject ignorance, subservience and oppression, or face consequences which, despite being set in a fictional realm, are only too real.

The Testaments by Margaret Atwood is published by Penguin Random House.
No comments: