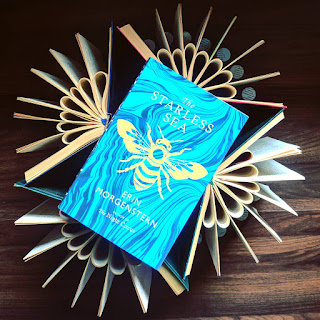 Zachary Rawlins is studying gaming, but his heart lies with stories. An avid reader, he devours the worlds created by others; flitting between worlds and being presented with the magical. However, there was no way he could imagine that an old, unmarked book he finds in the university library could literally change his life forever. In finding this book, Zachary has been thrust into the no-longer secret world of literary espionage. While there are those who seek to destroy Zachary’s discovery and protect the secrets it may unlock, there are others who wish to welcome him into the unknown. The choice is his alone.

As Zachary begins to understand the significance of the book, and the people in search of it, he is introduced to a home he never knew he needed – a hidden world where books and stories are everywhere; protected and nurtured, so that they may never be lost.

The Starless Sea is a truly unique and unusual book, flitting between multiple narratives and times, with sections of smaller stories woven into a grand tapestry that is as impressive as it is astonishing. To find yourself between the pages is to literally be in the maze of stories Morgenstern describes. At times overwhelming and almost confusing, this book is so carefully detailed, with such an intricate plot, that it runs the very serious risk of creating literary fatigue in the reader. Truly, this book ruined me for some time after I finished it – I struggled to be content with any other book, with a good ol’ linear narrative with cause and effect and a signposted narrative that plays out as it should. The Starless Sea does not follow convention, and this freedom and unexpected narrative make this book nothing short of an actual masterpiece. The Starless Sea feels more like a dream or memory than a novel – you dive into it wholeheartedly and without regret. Morgenstern’s ideas are so vivid, so colourful and playful and unexpected, that they feel as real as the world outside of their pages, and that alone is an accomplishment. I suspect that Morgenstern employs magic to assist her with her plots; they’re that good. Truly, I pity the titles which will try to hold their own against The Starless Sea – Morgenstern has created a literary heavyweight without an equal. This book is the definition of literacy success.

The Starless Sea by Erin Morgenstern is published by Harvill Secker, an imprint of Vintage, a Penguin Random House company.
No comments: