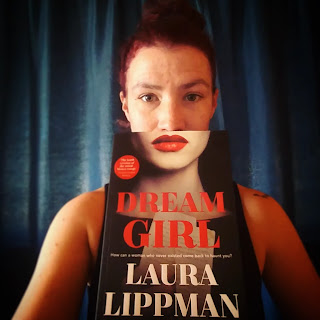 Gerry Andersen is supposed to be writing his next best-seller. Instead, he’s finding it increasingly difficult to write. So when he is bed-bound after an accident, it seems the perfect excuse to write, and an equally attractive excuse for not writing.

The truth is, ever since he wrote the critically acclaimed ‘Dream Girl’, he just doesn’t seem to have another great story in him. When he created the character of Aubrey, he created literary perfection, and he’s not sure he can repeat that. To make matters worse, he might be losing his mind. His forced bed rest has put him at the mercy of his assistant, and an oddball night nurse. Yet neither of these women seem to believe him when he complains that someone pretending to be Aubrey has been harassing him. After all, how can someone that never existed torment an aging writer?

As the situation escalates, Gerry can’t help but wonder just what this fake Aubrey wants, and exactly how much she is prepared to do to get it.

Dream Girl is an ingenious novel that sees our protagonist carefully dance between fact and fiction, as his past actions and present predicament collide into a single, messy situation, and someone is going to get hurt. In Gerry’s trip to what he considers the top of the food chain, he’s been blissfully unaware of the damage he’s left in his wake, and now it’s time for him to be reminded, and pay the price.

Laura Lippman has written the aging white male to perfection – while we’re initially shown the world through his eyes, and according to his whims, soon enough, there are inconsistencies in Gerry’s views and opinions that leads to cascades of warning bells, as we finally discover the truth of Gerry’s life and writing. Dream Girl is a perfect and thrilling representation of ‘us vs them’, with a delightful and nuanced discussion of action, reaction, and consequences.

Dream Girl by Laura Lippman is published by Faber & Faber, and is available in South Africa from Jonathan Ball Publishers.

Email ThisBlogThis!Share to TwitterShare to FacebookShare to Pinterest
Labels: mindf*ck, murder most foul, who REALLY did it?