Review: The Doors of Eden by Adrian Tchaikovsky 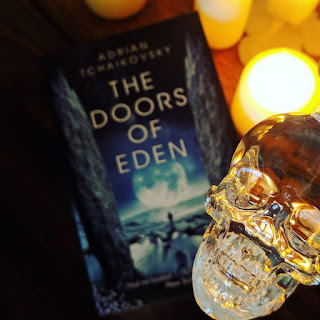 Four years ago, Lee’s life changed forever. While on a monster hunt with her best friend and better half, Mal, the two girls are separated, and Mal disappears without a trace. Over the years, Lee has tried to maintain her sanity while searching for Mal, despite never having a trace of evidence. Until suddenly, Mal returns, amid an unusual break in at a scientist’s home, and she has some strange company. For four years, Mal has been skipping across space and time with a decidedly unhuman posse. And she has bad news.

Elsewhere, Julian Sabreur of MI5 is dealing with a national threat to security, as a top government scientist has been attacked, and losing her isn’t an option. Yet when he tries to make sense of the attack, he finds only strange leads that lead him directly to Lee and Mal, and their otherworldly company.

There’s very little to fault about this book. There’s something about a carefully written story that believably warps our sense of space and time that I can’t resist, and The Doors of Eden is not only a contender in this genre, but a heavyweight. Literally.

But don’t be intimidated by the size of this tome. The prose is so elegant, and the writing so snappy, that you soon forget you’re making your way through a 597-page monster. As the story unfolds, the pain in your wrists will be replaced with joy – at a truly mesmerizing story, and a serious FOMO for earths that never were.

Tchaikovsky has a unique talent: he writes science fiction that reads like real science. Between each chapter of this book, there’s a clever trick – a chapter from a biology text that not only gives weight to the strange creations that have sprouted from the writer’s imagination, but manages to make all these seemingly outlandish theories not just possible, but believable. By the final chapter of The Doors of Eden, you’ll have been so cleverly primed to believe in the extraordinary, that you’ll no longer notice that faint line between reality and fiction – it’s abolished, by sheer good writing and epic story-telling. That kind of magic alone is what makes The Doors of Eden worth reading – it’s as much an experience as it is a journey through space and time.

The Doors of Eden by Adrian Tchaikovsky is published by Tor Books, a Pan Macmillan company.