Review: The Monsters We Deserve by Marcus Sedgwick 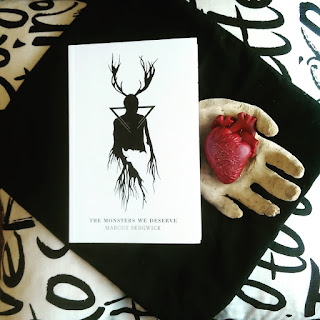 Marcus Sedgwick is searching for monsters. Egged on by his publishers and the success of his last horror story, he once again needs something dark for his next book. Alone in a run-down cabin in the woods he hired for the purpose, he is isolated and at the mercy of the impending winter. With approaching snowstorms, he relies on nature for a writing deadline – the book must be complete before the bad weather comes. His inspiration is a creature born of strife, pieced together and cemented in the minds and hearts of millions of readers yet which he finds lacking. It is Mary Shelley’s story of Frankenstein.

Despite the complete isolation of the cabin, and perfect conditions for writing, Sedgwick’s distaste for Frankenstein and desire to leave make it near impossible to write more than a few self-depreciating sentences in his notebook. As the heart of winter draws ever nearer, the strain begins to set in, and he finds himself in a creative limbo which slowly causes him to unravel, and to doubt his own sanity.

Through a slowly growing sense of paranoia, The Monsters We Deserve has a sinister and otherworldly narrative which give it the delightfully nostalgic feel of the Gothic horror stories of the past. Here, the true horror lies not in what we are shown, but in the possibility of what lies beyond our reach. The reader’s own imagination is an essential ingredient in the narrative, linking the reader to the story, and to Sedgwick as both character and writer. He has graciously allowed the reader to share in his creation. Sedgwick’s well-trodden line between reality and impossibility is perhaps the scariest aspect of all.

The Monsters We Deserve is a clever and beautiful ode to classic gothic horror; specifically, to Frankenstein and its ilk. It is not a particularly long book, nor difficult to read, yet it is powerful and resonates long after the final page – haunting and a sly planter of doubt. Sedgwick clearly demonstrates that he understands the true heart of horror – the subtle fear that creeps up on you as you progress as a result of the shadows filled in by your own mind, and not forcefully illustrated by the author’s hand.

To engage with this book goes beyond just reading, it’s an experience in which one invests. Artistic, and dark with unusual layout and beautiful artwork, this book is a journey in itself. It is poetry in chaotic motion, begging to be read in one tense but spell-binding sitting.

The Monsters We Deserve by Marcus Sedgwick is published by Zephyr, an imprint of Head of Zeus, and is available in South Africa from Jonathan Ball Publishers.